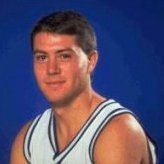 As I watch the Eastern Conference Finals, I'm really starting to dislike Jayson Tatum. Between spurning the Billikens, the constant whining, and the fact that he's the the new ESPN golden boy without

No doubt in my mind he would be be a billiken with Ford. Regardless he is doing a great job on all ends in the Playoffs and for the Celtics. Some have him picked for rookie of the year.

Because his Dad played at SLU. Because his godfather is Larry Legend. Because potential 2022 SLU recruit Larry Hughes Jr is close with him. Because every big name recruit from STL looks up to him. Thi